So what does it mean that the Median Home Price for Las Vegas has leveled out over the last 12 months?

See the chart below. 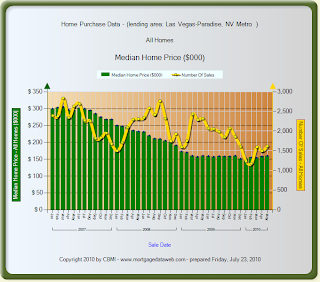 What does it all mean?

Real estate is one of the best businesses now a day. Nice real estate blog. Thanks

My name is Martha Jackson and I am the webmaster of some good finance related sites. I came to know about your blog http://mortgagedataweb.blogspot.com/ through search engine. I find your site interesting as well as informative for my visitors. Hope your visitors would also gain from the content of our sites. I am interested in exchanging links with you. It will be mutually beneficial for both of us. If you wish then we can also “exchange articles” and “guest posts”. To give you one more advantage I can place your link within my content.

Waiting for a quick and positive reply.

This is a terrific site! It has been very informative and useful to me. I have found several useful products. Just wanted to let you know how much I enjoy your website. I find it really useful. Thank you so much for all the info. I received from your sites!

hi my self peter rose i live in NY>>>>>>>>
It's really quite easy to recruit new real estate agents. When a broker who loves the business talks with a potential agent candidate, you can feel the excitement building. From being their own boss to growing a lifelong business, there are so many reasons to choose a real estate career.

There are no limits for growth of your real estate business. Couple a good attitude with a superior work ethic and you can realize fantastic rewards. You'll need to incorporate good business skills and develop effective marketing. It's all in your hands.
Your business can be as large as you like...............
it is nice estate blog thanks

Well, it’s amazing. The miracle has been done. Hat’s off. Well done, as we know that “hard work always pays off”, after a long struggle with sincere effort it’s done.
-----------
vernon
Mortgages

Written information is really great, I will follow you, constantly, to share this information with my friends, discussions about real estate, I would recommend this blog to keep track of.[url=http://samsunsatilikdaire.blogspot.com]Samsun Satilik Daire[/url]

A blog is great for the companies, the companies will tell turkey Samsun know and study your blog. samsunda satilik daireler