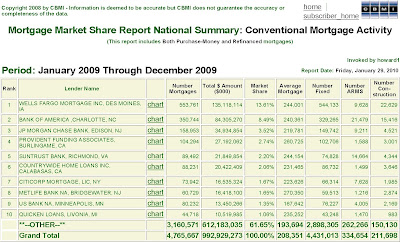 Posted by mortgagedataweb at 11:32 AM 6 comments: 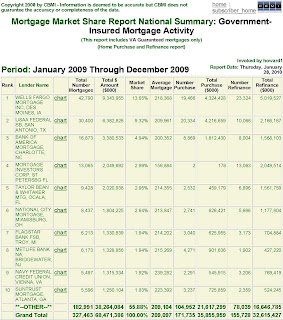 The chart above shows the leading VA mortgage lenders for 2009.  Note that Bank of America acquired Countrywide, MetLife Bank acquired most mortgage operations of First Horizon Home Loans, Taylor Bean Whitaker is bankrupt, and National City was acquired by PNC Financial. These institutions may have recorded mortgages under names prior to their aquisition dates. Mortgage Investors Corp specializes in refinance mortgages.
One big winner for the year include Bank of America who increased their VA mortgage market share from 1.9% in 2008 to 4.94% in 2009. Mortgage Investors Corp also showed renewed strength by doubling their market share  in 2009 to nearly 3.00% and moving from 15th in the nation to 4th in the nation in VA mortgage origination (wonder what they would be if we only considered refinance mortgages?). We have report products that tell you that!

Later will shall publish the leading Conventional mortgage lenders for 2009.
Posted by mortgagedataweb at 10:30 AM 5 comments: 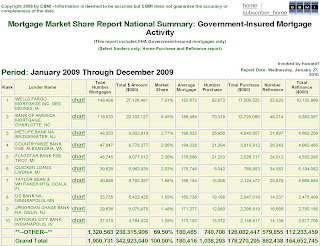 The chart above shows the leading FHA mortgage lenders for 2009.  Note that Bank of America acquired Countrywide, MetLife Bank acquired most mortgage operations of First Horizon Home Loans, Taylor Bean Whitaker is no longer originating mortgages, and National City was acquired by PNC Financial. These institutions may have recorded mortgages under names prior to their aquisition dates.

Later will shall publish the leading VA mortgage lenders for 2009.

Posted by mortgagedataweb at 11:26 AM 9 comments:

When I applied for handicapped parking I had to go to Nassau County Social Services. You wouldn't believe what I saw there. It was like a candy store for free money, and it doesn't matter whether or not you deserve it (or even need it). Just to make sure that they give away the maximum amount of free money they have digital signs advertising every program imaginable. Here for food stamps? What about aid for paying utilities? Need housekeeping? Help managing your finances? Temporary housing? Medical transportation? Do you know how to give other people's money away? We're looking for people to work here.

I didn't see AIG, Lehman Brothers and Bank America on the line, but I think that's because they have a VIP entrance with valet parking.


I want what AIG got. A TRILLION DOLLARS. Don't forget the food stamps, housecleaning, handicapped parking and special housing. I'm not asking for much. I'm a capitalist, so the government should send me free money just like they do with the other capitalists. Then I can give myself the bonus I deserve.

No wonder people want to come to America. This is truly the land of opportunity. You can earn a billion dollars here. Or, you can lose a billion dollars and the government will give you 2 billion to make up for it (plus housekeeping, food stamps and handicapped parking).


So tell the world that in America the streets are paved with food stamps and entitlement programs. Universities offer programs in giving other people's money away (and the coursework is very easy, too). But lets make sure that we let lots of illegal immigrants in, because someone has to work in order to pay for all this.

Whatever happened to welfare reform? Shouldn't all those executives at AIG be sweeping streets to pay for their welfare? For a trillion dollars we should make them clean up America with a toothbrush.

I have the ultimate idea to support capitalism. The US should insure stock trades. Stocks can go up, but they can never go down. Just imagine what that would do for the stock indexes.

A blog follower sent me the above viewpoint. The author requested that his/her name be withheld.
Posted by mortgagedataweb at 11:50 AM 5 comments: