The top ten FHA retail mortgage lenders for July 2008 are

Countrywide was merged into B of A. First Horizon acquired by Metlife Bank. These rankings are based on retail (as opposed to wholesale). So who won the contest?
Posted by mortgagedataweb at 12:59 PM 1 comment:

The chart shows the month surge in FHA mortgage originations. This is the highest number since September 2003. Can you guess who are the top 10 leading lenders?
Posted by mortgagedataweb at 10:29 AM 6 comments: 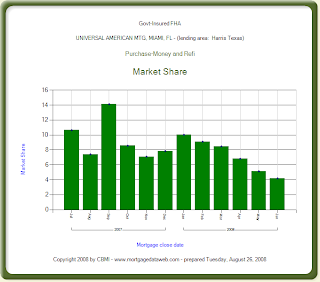 Even though Universal American Mortgage is the leader for the FHA market in Harris County, Texas January through July 2008, their market share is declining. See the accompanying chart. This is happening while the overall marketplace for FHA is continuing to increase.
Posted by Dave McEvoy at 2:01 PM 1 comment:

Yea we know! Same old story. We still have to tell it like it is. If your a mortgage banker in Las Vegas, these days your having trouble making money. You can't even fund the casinos.

So what do you think is happening in Las Vegas? Perhaps MGM's City Center and Donald Trumps' International Hotel and Towers have employed non profit down payment assistance grants with FHA mortgages to help their customers purchase housing units?

What happens in Vegas ....
Posted by mortgagedataweb at 2:12 PM 1 comment:

Jumbo Mortgages - No Boost in Sales

The chart shows the monthly percentage of $jumbo purchase mortgages to all conventional purchase mortgages. $Jumbo mortgages in the data are mortgages having mortgage amounts greater than the conforming loan limits set by HUD. The data in the chart does not use the new maximum mortgage amounts that the GSEs can purchase as a result of recent legislation (economic stimulus legislation temporarily set the conforming loan limit as high as $729,750 until December 31, 2008 and it is location dependent).

In 2005, $jumbo mortgages were conventional mortgages greater than $359,650. In 2006, 2007, and 2008 $jumbos were mortgages greater than $417,000 (the data in the chart does not adjust for higher conforming limits in high cost areas). The step downward of percent $jumbo in the chart following December 2004 and December 2005 was caused by the increases in the conforming mortgage loan limit. There was an increase in the conforming loan limit between 2003 and 2004 however the percent of $jumbos were rapidly increasing in step with the surging prices of homes at that time.

As New Hampshire conventional mortgages continue to decline over the past year, Merrimack Mortgage has continued to work through the decline capturing a top five seat for all of New Hampshire's market share. As we have previously viewed this week, Merrimack Mortgage continues to rise and beat out powerhouses such as Wells Fargo and Countrywide in government insured mortgages and now we find them coming close in conventional mortgages. The graph shows the monthly conventional purchase mortgage originations over the past years and one can see the decline in these mortgage sales. What is continuing to help Merrimack in this depressed New Hampshire home purchase market?
Posted by mortgagegirl at 12:01 PM 2 comments:

Is the national elephant capable of retaining their top position in or will the local strong man remain the giant?

Posted by mortgagegirl at 1:21 PM No comments:

Merrimack Mortgage is Growing the Fastest in New Hampshire

Merrimack Mortgage of Concord, NH is making the most of the growth of FHA mortgages in New Hampshire. So far this year, Merrimack Mortgage has moved into second place just behind Wells Fargo Mortgage with a 6.94% market share.
Posted by mortgagedataweb at 10:51 AM No comments:

declined. Fewer originators seem willing to offer jumbo mortgages even though recent legislation allows mortgages as high as $729,750 to be sold to the GSEs.

Since Hudson City appears to focus on jumbo mortgages, their results show that they are dominating that segment of the mortgage market in Connecticut. So if no one else wants to finance jumbo size mortgages, Hudson City is ready to handle it! Look at their market share soar!

Posted by mortgagedataweb at 9:56 AM No comments:


In St. Louis, this young bank now shares mortgage origination leadership with companies such as Pulaski Bank, Bank of America, Wells Fargo, US Bank, and PHH Mortgage. Each of those companies have originated substantially fewer mortgages in the firs

The St. Louis metropolitan area mortgage market has been down significantly. The monthly trend shows a slowdown in St. Louis. Stifel Bank and Trust's mortgage origination growth under these difficult circumstances makes them a mortgage lender to watch.


We will watch and report back periodically!
Posted by mortgagedataweb at 1:16 PM No comments: 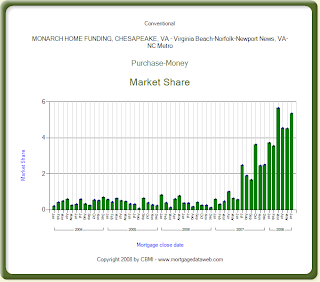 Since entering the Virginia Beach-Norfolk-Newport News market in early 2004, Monrach Home Funding has continued to increase their market share in the VA product area. Monrach's market share has particularly increased since the latter half of 2007. Take a look at the accompanying chart.
Posted by Dave McEvoy at 11:36 AM 1 comment: Since the Housing Bill became law last week that includes a permanent increase the FHA Loan Limits, can we expect this to continue to increase every month?
Posted by Dave McEvoy at 12:14 PM 4 comments:

Where is the Bull Market in Mortgages? We Help You Find It!

The chart shows the monthly number of FHA mortgage originations since January 2000. June 2008 was the highest since October 2003.

True! I stole the headline from Cramer.
Posted by mortgagedataweb at 1:40 PM 1 comment: