Clusters of VA Mortgage Originations in the US 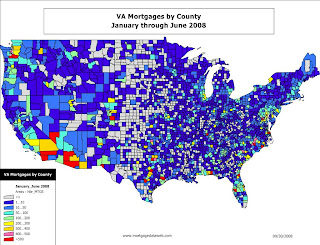 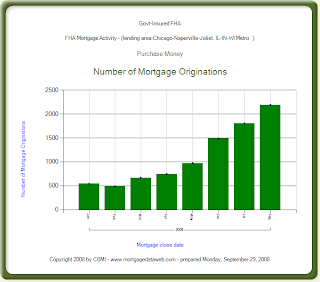 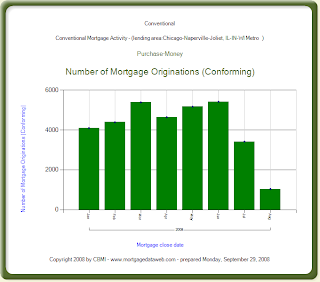 Will there be a Conforming market left in September?

Posted by Dave McEvoy at 1:33 PM No comments: Links to this post

Take a look at the leading counties for FHA dollar volume year-to-date through July 2008. Maricopa county is showing tremendous growth this year. The chart below shows their month by month growth in originations.

Click on the image below for a larger view. 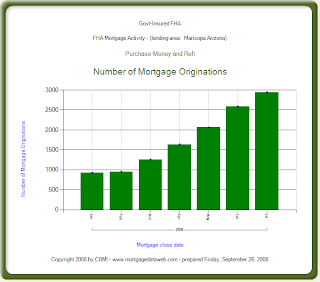 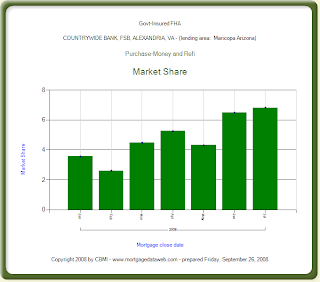 Posted by Dave McEvoy at 1:23 PM 5 comments: Links to this post

Many mortgage companies who went bankrupt in 2007 and failed to disclose their 2007 Home Mortgage Disclosure Act (HMDA) data. These same mortgage lenders originated a significant amount of new mortgages in 2007 until they closed down business operations. Researchers in residential finance use HMDA data to analyze mortgage lending activity. When using the 2007 HMDA data, researchers will need to make adjustments in their analysis to account for the significant quantity of mortgage activity that is missing from the data.

MortgageDataWeb has mortgage lending data collected from municipal recordings. Some examples of bankrupt mortgage institutions who did not report their 2007 data are provided here along with the metropolitan areas where their loans were originated. The company reports show the mortgage company's originations and market share in the metropolitan areas they operated in. These companies had a substantial market share in the markets they operated in until the time they stopped funding new mortgages in 2007.

Click the Links Below to view the mortgage orgination data by metropolitan area for the companies below:

American Home Mortgage (including American Brokers Conduit) of Melville, New York originated over 71,000 conventional mortgages ($18.8 billion) until they shut down in August 2007.

There is so much more missing from 2007 HMDA! Where are you going to find that mortgage data?
Posted by mortgagedataweb at 11:46 AM 3 comments: Links to this post

Click on the image below for a larger view of the chart. 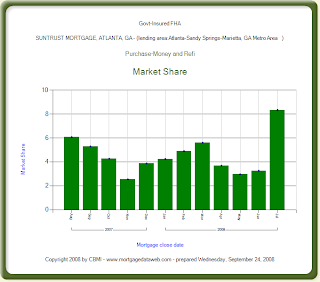 Interested in finding out who are the fast risers in Atlanta and other markets? Contact MortgageDataWeb now.

Posted by Dave McEvoy at 12:12 PM No comments: Links to this post

Today, let us take a look at FHA Refinance originations nationally. The chart below shows the upward trend over many months since the passage of the Economic Stimulus Package. However, the Refi originations dipped slightly in July 2008. Is this a sign of a trend or will the numbers bounce up again? Check back in a few weeks for the August results. 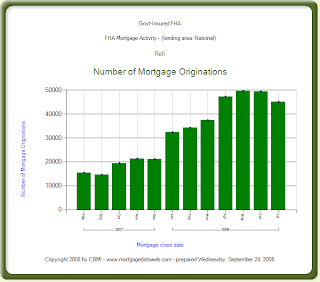 Posted by Dave McEvoy at 1:47 PM No comments: Links to this post

Since 2004, any mortgage having an annual percentage interest rate exceeding the rate on treasury securities of comparable maturity by a threshold (3% for first lien and 5% for subordinate lien) must be reported in the lender's annual Home Mortgage Disclosure Act (HMDA) data submission. All reported mortgages having annual percentage rates below the HMDA rate spread threshold will not include a rate spread value in the lender's annual HMDA data submission.

The chart shows that in 2007 there was a substantial reduction in the proportion of rate spread reportable mortgages. From 2004 to 2006 there were rapidly rising proportions of mortgages having HMDA reportable rate spreads.

According to the HMDA data, the GSE purchased 2.1 million mortgages in 2007. The mortgage amounts were $433 billion. These are the lowest numbers in more years than we have data for. 2007 was a bad year for the mortgage industry. 2008 is worse! What will 2009 bring?
Posted by mortgagedataweb at 12:32 PM No comments: Links to this post

Today's (18 Sept. 2008) news that WaMu seems to be searching for a buyer presents some interesting questions when analyzing the 2008 market share data. Take a look at the chart below for the State of California. 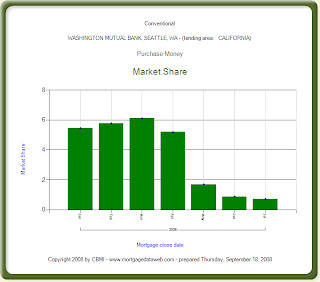 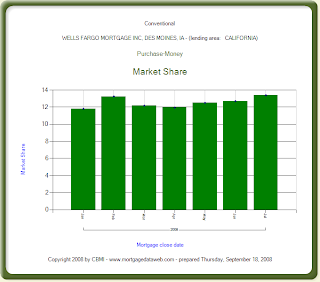 The 2007 HMDA data was released last Thursday. MortgageDataWeb has already published market share reports for all areas of the nation.
When we look at the list of the top 100 hundred conventional mortgage lenders, it has so many mortgage institutions that are on the "Mortgage Implode" web site.

Here we are publishing the top 10 conventional mortgage lenders for 2007 and 2006. You can contact MortgageDataWeb.com to order the top 100.

Some findings are that in 2007, there were roughly 3.4 million fewer conventional purchase and refinance mortgages as compared with 2006.

Many of the high-cost real estate markets have seen a tremendous growth in FHA originations since the raising of the loan ceilings earlier this year. The Washington DC Metro area is one such area. The chart below shows the growth in mortgage orginations from August 2007 through July 2008.

Click on the image below for a larger view of the chart. 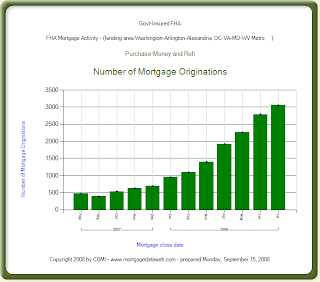 To see who is leading in this growing market, see the chart below.
Click on the image below for a larger view of the chart. 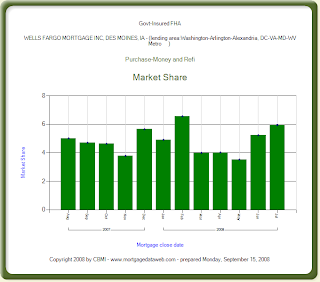 Posted by Dave McEvoy at 11:19 AM 2 comments: Links to this post

Who is Gaining in Las Vegas?

As was discussed in an earlier post in this blog, there is a significant growth over the last few months (through July 2008) in FHA originations in Las Vegas. See the chart below.
Click on the chart to see a larger image. 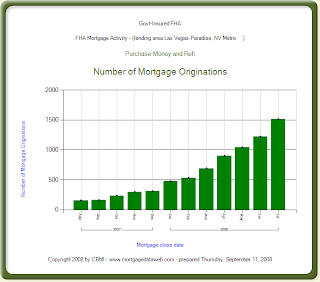 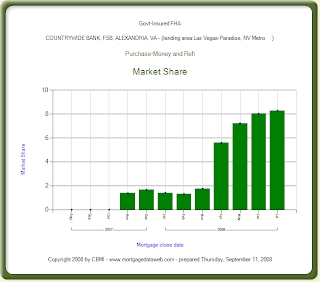 Universal American is one lender who may be paying the price for this increased competition. Below is another chart that shows their overall decline in market share from August 2007 through July 2008.
Click on the chart for a larger image. 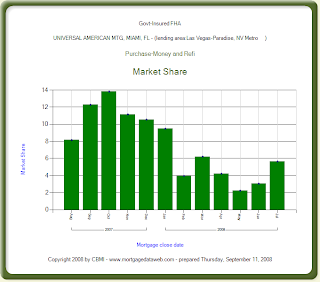 Check back to see if this trend continues.
Posted by Dave McEvoy at 12:27 PM No comments: Links to this post

Over the last year, we have seen many reports that Stockton, California is ground zero for the foreclosure mess. I decided to take a look to see if the FHA programs put in place last year have helped Stockton rebound at all.

Take a look at the chart below and click for a larger image. 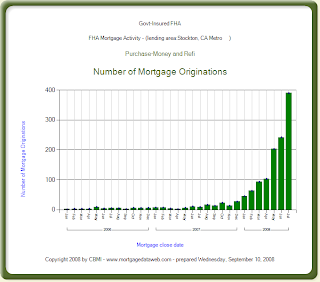 As you can see from this chart, the FHA loan originations have increased dramatically since the beginning of this year. One lender that seems to be taking advantage of this opportunity is Wells Fargo.

Click on the chart below for a larger image. 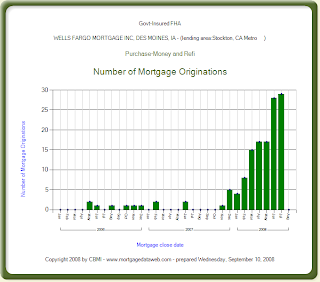 Any other guesses on who else is taking advantage of this opportunity of getting homeowners who are struggling into more affordable products?

Woodbridge, a bedroom community of Prince William County Virginia is home to roughly 12,000 households. Subdivisions such as Lake Ridge, Dale City, Rippon Landings have many homes financed with FHA mortgages during the 1970s through the 1990s. After 2003 homeowners overlooked FHA for financing home purchases. 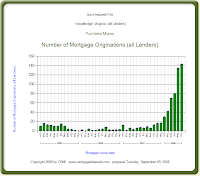 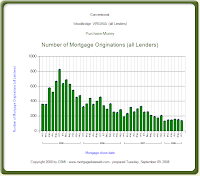 in Woodbridge within several months.

Weststar Mortgage, who coincidentally is headquartered in Woodbridge, succeeded in grabbing a large market share of the FHA mortgages in Woodbridge. Westar Mortgage happened to be ranked first in all of Prince William County for FHA purchase mortgages in the first half 2007. During that period, Weststar only originated 6 FHA purchase mortgages and all lenders originated 61. Now those numbers are surpassed in a single month just within Woodbridge. This reveals another big positive change in an otherwise dismal mortgage and housing market.

Posted by mortgagedataweb at 1:10 PM 3 comments: Links to this post

Mortgage Master, Inc., of Walpole, Mass. outperforms its prior years in shares and market share growth even in the miserable housing and mortgage market.

Click the thumbnail image for a Real Report and Chart options


Click the thumbnail image for a Real Report and Chart options

Who else performs this well despite the dismal mortgage environment?
Posted by mortgagedataweb at 1:48 PM 1 comment: Links to this post 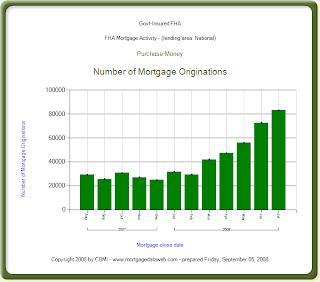 The economic stimulus package continues to have an impact on FHA loans. Can we expect a similar increase in August? Check our blog again for the results.
Posted by Dave McEvoy at 12:30 PM 1 comment: Links to this post 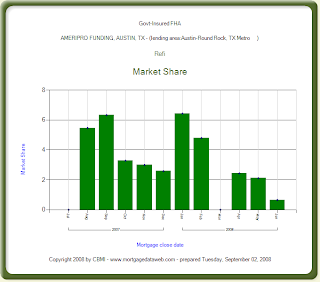 Ameripro Funding from Austin, Texas is the #7 ranked lender for FHA Refi business in Austin-Round Rock for the last 12 months through June 2008. However, their market share percentage is trending down in a growing market (FHA Refinance in Austin). Take a look at the accompanying chart to see their market share trend. Any guesses for who is stealing their market share?
Check back to this blog in a couple days for some answers.
Posted by Dave McEvoy at 11:13 AM No comments: Links to this post