The table above lists the leading FHA mortgage originators for January 2010. For each mortgagee in this list, the lending volume for January 2009 is included to illustrate the year over year change.

The data shows both Wells Fargo and Bank of America are bigger and have greater market power. Much of the increase for Wells can be attributed to the acquisition of Wachovia and much of the increase for Bank of America are the result of acquiring Countrywide. A similar contribution to increased market share and higher ranking applies to MetLife Bank, who acquired First Horizon's mortgage offices and PNC who acquired National City. Later on we shall see if these bank institutions can maintain their upward momentum. Meanwhile, JP Morgan is not only giving up market share to their competitors, they are giving up FHA originations in an increasing mortgage market segment.

The accomplishments of Quicken, Metrocities, Suntrust, PHH, and Primelending reveal new leaders in the realigned FHA mortgage market.
Posted by mortgagedataweb at 10:21 AM 8 comments: Links to this post 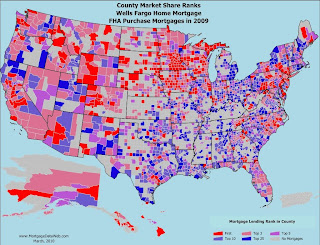 Click on Map Image for Larger View
The map image shows the retail mortgage market share rankings of Wells Fargo Mortgage in all counties. The bright red colors represent first position in the market. The mortgage data includes all FHA home purchase mortgages for 2009.
Posted by mortgagedataweb at 1:44 PM 11 comments: Links to this post